How does a picky eater from small town Montana become a Sushi aficionado? I don’t know. It just happened. I think along with the rest of the Western world I first tried sushi because I thought it was exotic and sophisticated. The really odd thing is that I didn’t even eat fish the time I first tried sushi! I couldn’t stand the fish. But for some reason the thought of eating it raw was intriguing.

Now I’ve eaten sushi all over from dives here in Colorado, to the highly regarded Sushi Den Sushi Roku in Las Vegas and Kai Sushi in Maui. I’ve had great sushi, bad sushi and so-so sushi.

When it comes to sushi, more often than not I am accompanied by one of my dearest friends. We share a love of the law, fashion, hiking, snowboarding and sushi, among other things. We also share a love of men who are not so fond of sushi. As such we often spend girls nights filling our bellies with wriggling pieces of fresh fish.

Last night Mary and I went to one of her favorite sushi restaurants, Sushi Hai, which is located in the uber trendy uber cute Highlands neighborhood in North West Denver. http://sushihai.com/index.shtml As always it was a great time with great food.

Our Order was as follows:

The Sushi was fresh & flavorful. The tempura was light & delicious. The shrimp was succulent and the veggies were fresh & crisp. The vegetables included sweet potato, zucchini, carrots, green beans, onions & red bell pepper. I got quite the zesty surprise when I tried the pepper, thinking it was a carrot, but it was fantastic!

And now for the Score…

The tempura gets 4/5 Stars
The Salmon Avocado Roll gets 3/5 Stars – it was fine, not great
The Unagi Roll was the loser of the evening. It was far too fishy. 1/5 Stars
The Lobster Tempura Roll gets 4/5 Stars
The # NINE gets a stunning 5/5 Stars  Whoever thought of puting strawberries with sushi was a genius!  The #NINE was amazing - sweet & savory, fresh & fruity... In the words of Rachael Ray “Yummo!”
Over all Sushi Hai gets a 4/5 Star Rating.

If you’re in the Highlands Neighborhood be sure to check out Sushi Hai. http://sushihai.com/index.shtml

Sushi Katsu
On a more adventurous night Mary and I gave Sushi Katsu a run for their sushi. Mary had just landed from a business trip, I had just returned from DIA for the second time in 2 days unable to get a flight to OKC due to record ice storms. The perfect solution to too many hours in airports? All you can eat sushi? Ok.

As we were exploring the sushi listings at peak dinning time on that Friday night we came across an interesting listing – all you can eat sushi. We giggled and thought why not. We then embarked on a very serious mission to master all you can eat sushi. We greedily order roll afer roll, piece after piece. When the waitress came to take our order she said “Just you two?” Yes we replied. She then explained the catch to all you can eat sushi: “You must eat everything you order – no eat it – pay full price”. Having been saved from what could have been a very, very large bill, we paired down our order and giddily awaited our food to arrive.

To say we ordered a lot of food would be an understatement. To say that the sushi chefs were taking bets on how these two little girls were going to finish over $125.00 worth of sushi would be accurate (Full price for what we originally ordered was over $200 worth of Sushi!). 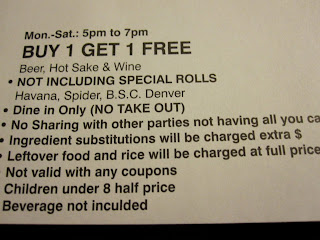 One of our Many Plates of Sushi 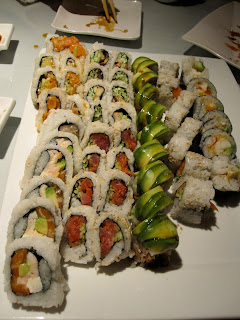 We ate our weight in sushi and almost every bite was worth it. The Scallops were not so good, too much milky sauce and just an all around off flavor. Mary wasn’t a fan of the Salmon Roe, but that was due to personal preference, not to the quality of the food. Over all the food was great and we got a kick out of the all you can eat adventure. I’m not sure which Sushi Chef lost the bet, but I’m sure he was entertained enough that he didn’t mind losing. 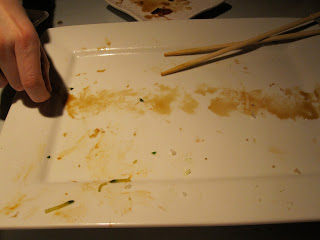 We Did It! Every last grain of rice! We win Sushi Katsu!
You should definitely check out Sushi Katsu http://www.katsusushi.net/
Posted by Granted By Tiffany at 3:57 PM 1 comment:

When I grow up I wanna be Jack Lalanne.  Ok not really, but I love juicing.  It's fun, healthy & usually pretty tasty.  Here are some recent creations:
Carrot, Kiwi, Pear, Clementine, Beet, Apple juice
The Prep 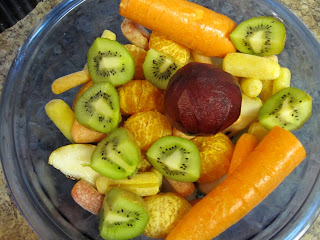 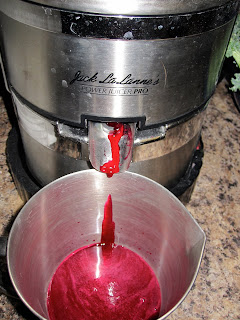 The finished product - it tastes much better than it looks 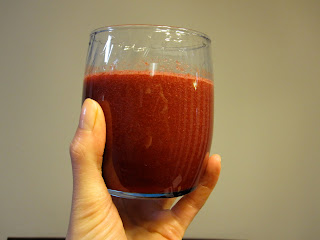 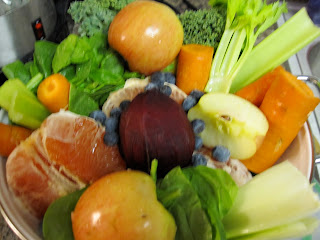 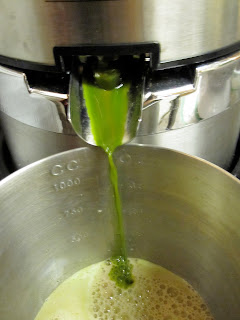 The final product - a little to "grassy" but still good 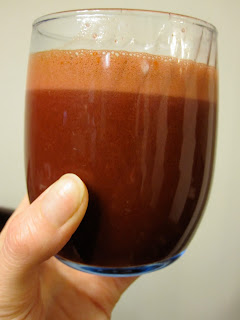 Here's to your health
Drink up
Posted by Granted By Tiffany at 10:58 PM No comments:

And she's back in the eating game

It has been almost three years since I've blogged!

To set the record straight:
No I have not been starving
Yes I still am a food snob
Yes I still critique every meal I eat
Now on with the blog. So many great places have been ignored by my blogging hiatus but in the process I have found some new favorites and some never again eateries. I have also rediscovered my love for experimenting in my own kitchen. This has led to a love of farmers markets, cheese mongers, and specialty stores. This has also led to many many pictures of my kitchen creations.
Now for the game change! This blog will now be about Food Food Food no matter how, where or how far along in the process it is in the cooking process.
Here is a little sample of what I've been cooking.
Frenched Rack of Lamb with Quinoa and grilled asparagus mushrooms and carrots 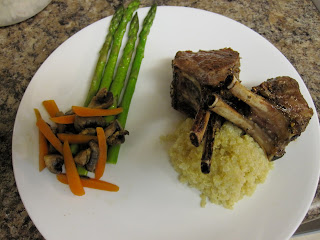 All Rights Reserved. Please do not publish anything from this blog without prior written consent and proper acknowledgement. Thank you.